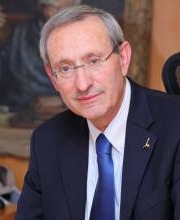 Chancellor of the Hebrew University of Jerusalem
huchancellor@savion.huji.ac.il

Menahem Ben-Sasson is the thirteenth President of the Hebrew University of Jerusalem, today in the midst of his second term of four years in this position.

Before appointment as President of the University in 2009, Prof. Ben-Sasson served as a Member of the Knesset and as Chairman of its Constitution, Law and Justice Committee.

Prof. Ben-Sasson is a researcher in the Department of History of the Jewish People in the Faculty of Humanities.  As a historian of Jewish heritage in the Islamic world, he wrote books and articles on a variety of topics, including the Jewish communities in Muslim countries, relations between religion and economy, as well as law and spirituality as authoritative sources in the Eastern society of the Middle-Ages.  He also specializes in research on the Maimonides, social and intellectual history, the literature of the Responsa and the works of the period of the Gaonim, research of the Genizah, as well as the works and leadership of R’ Saadia Gaon.

Center for Integration of the Heritage of Oriental Jewry

The YouTube channel of the University has an abundance of speeches by Prof. Ben-Sasson from a profusion of events:  Board of Governors, scholarship award ceremonies and conferences

“The Jewish Intellectual Revolution of the Tenth Century”, a lecture by Prof. Ben-Sasson

Contact details: The Office of the President is located in the Administration Building on the Mount Scopus Campus, second floor, room 07. Reception, by appointment.