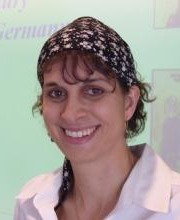 Prof. Elisheva  Baumgarten (assoc. professor) studies the social and religious history of the Jews of medieval northern Europe (1000-1350) and teaches medieval history in the Department of Jewish History and Contemporary Jewry and in the Department of History. Her research focuses on the social history of the Jewish communities living in the urban centers of medieval Europe and especially on daily contacts between Jews and Christians. Her work seeks to include those who did not write the sources that have reached us, with a special interest in women and gender hierarchies.

She is the author of two books:

and has edited a number of books, most recently

Her current projects include a social history of medieval Jewish marriage that is part of a larger project that seeks to outlines the contours of daily life in the Jewish communities of northern Europe during the High Middle Ages.

Elisheva is a member of Israel's Young Academy. She was awarded an ERC grant for her current research project Beyond the Elite: Jewish Daily Life in Medieval Europe and is a recent recipient of the Michael Bruno Memorial Award for 2016.