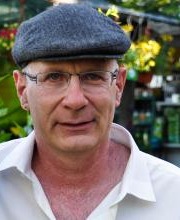 Amos Goldberg studies the Holocaust and Holocaust memory at the intersection of history, critical theory and literature. His research and publications focus primarily on the cultural and literary history of Jews during the Holocaust, the study of trauma, the historiography of the Holocaust, and on the development of Holocaust memory in the global age. His book Trauma be-Guf Rishon: Ketivat Yomanim bi-tekufat ha-Shoah  (2012) won the Egit Prize for Holocaust and Jewish Resistance Literature. The English version of the book: Trauma in First Person: Diary Writing during the Holocaust (Indiana University Press, 2017) was listed as an outstanding academic title for 2018 by Choice, the periodical of the Association of College and Research Libraries.

Amos’s current research focuses on two major topics: 1) the cultural history of the Warsaw Ghetto—including rumor culture, coffee houses, the ghetto jester, and attitudes toward death; and 2) the writing of memoirs by Jews after the Holocaust, central to which is the theme of coping with the experience of helplessness after the event.

His books and articles have been published in English, Hebrew, Polish, French, German, and Arabic.

In 2014 Amos founded the Hebrew University Forum for Scholars of the Holocaust, Genocide and Mass Violence, which he continues to coordinate.

Since 2013 he has been a member of the scientific committee of the Dinur Center for Research in Jewish History.

He is a research fellow at the Van Leer Jerusalem Institute, serves on the scientific committee of the Van Leer Institute Press, and on the core advisory board of the Hebrew-language journal Theory and Criticism. He also serves as a member of the German-Israeli Minerva fellowship committee

From 2007 to 2013 Amos was co-editor of the bilingual journal Dapim: Studies on the Holocaust (Taylor and Francis).

He was a visiting (post-doctoral) scholar at Cornell University and a visiting lecturer at Clark University’s Strassler Center for Holocaust and Genocide Studies. He is currently serving as the  2018-2019 J.B. and Maurice C. Shapiro Senior Scholar-in- Residence Fellow at the Mandel Center at The United States Holocaust Memorial Museum.

Amos was awarded a research grant from the Israel Science Foundation, and has won numerous prizes and grants.

Bashir Bashir, and Amos Goldberg (eds.), The Holocaust and the Nakba: A New Grammar of Trauma  and History, New York: Columbia University Press. 2018.