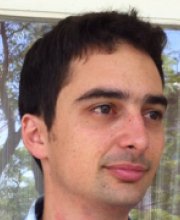 Abstract: In the aftermath of the 1967 Six Day War, over a million Palestinian residents of the West Bank and the Gaza strip found themselves under Israeli occupation. This occupation, which has proven to be a long-lasting and stable regime, came into being very rapidly, as within a few weeks Israel established firm and pervasive control over a large and hostile population. Long-term plans and vision statements appeared within months, resulting, within just a few years, in substantial changes in Palestinian daily life.

In my dissertation I will use historical research tools to study the planning and management actions of the first few years of Israeli administration in the Occupied Territories, as carried out by existing Israeli state ministries, the newly established military government and various state-related organizations (e.g., the Jewish Agency). Together, they created the Israeli administration in the Occupied Territories which employed experts, bureaucrats, military personnel, and academics and assumed responsibility for all aspects of civil life, from health and education, to housing, employment, agriculture and welfare. During its first years the administration worked to deepen Israeli control over Palestinian society, while eradicating various forms of resistance within it. Israeli administrators, be they economists, Middle East experts,  engineers, or clerks, were placed at the forefront of the efforts to subjugate Palestinian society to Israeli control.

I believe that the time is ripe for a thorough historiographical inquiry of the recent history of the State of Israel, and particularly of the seminal moment of the establishment of Israeli control in the Occupied Territories. This research could contribute significantly to our understanding of a crucial period in Israeli history, a period which shaped the relations between Jews and Arabs for the next half century.